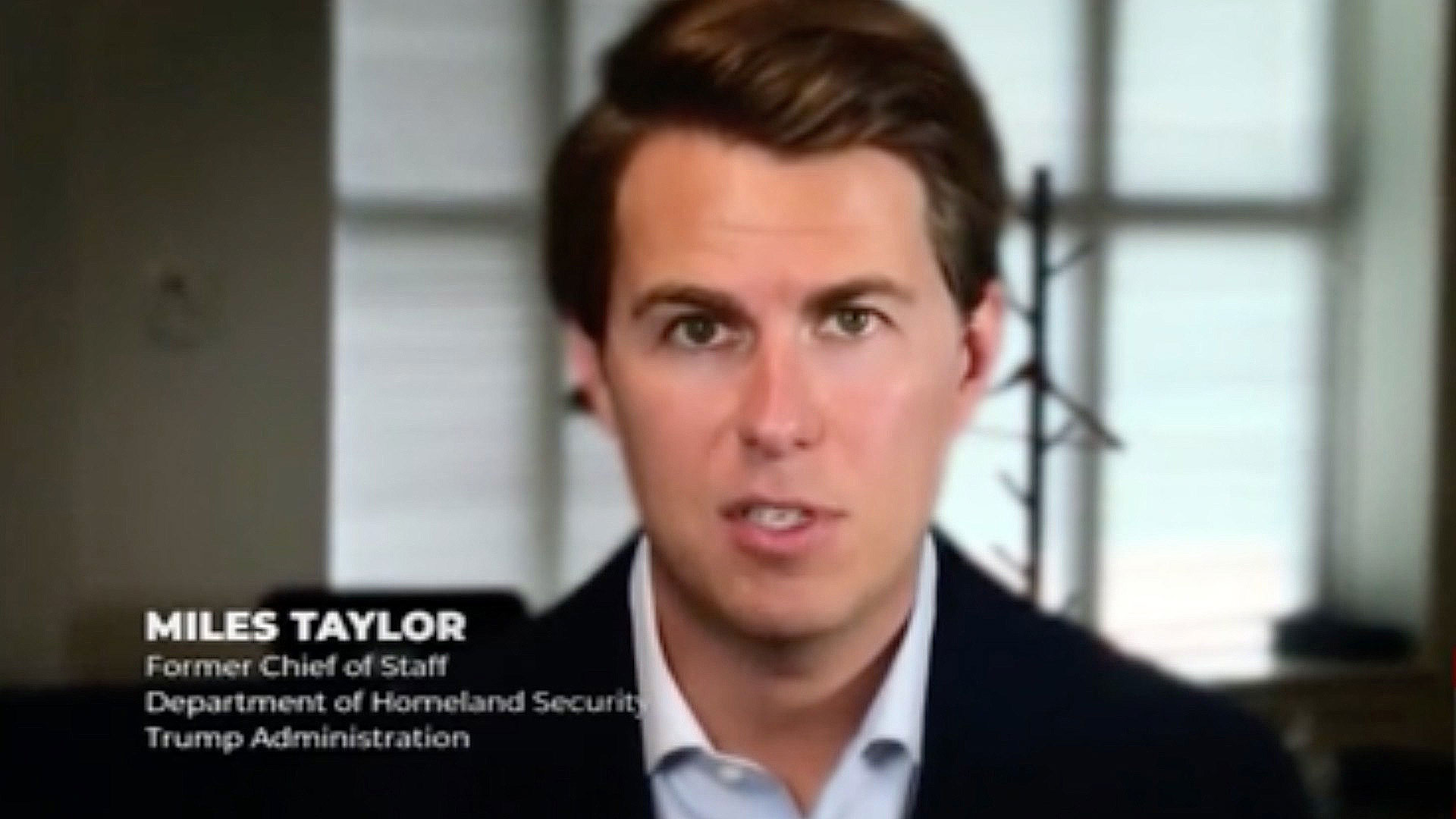 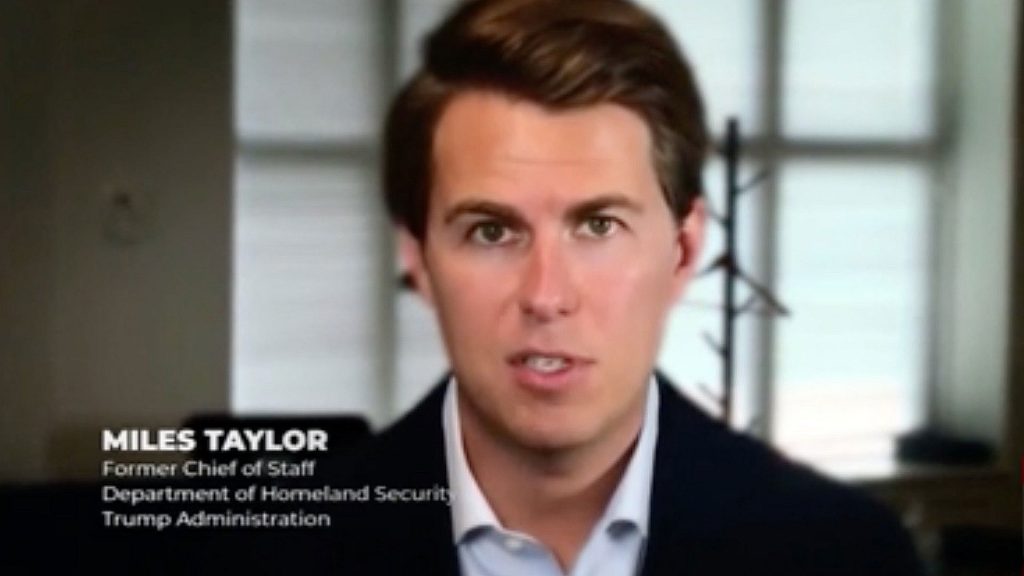 Trump appointed former head of the Dept. of Homeland Security, Miles Taylor, states, “I can attest that the country is less secure as a direct result of the president’s actions,” and describes what they saw from Trump as “terrifying.” Trump was not interested in pressing national security issues (cyber security, terrorism, etc.). He just wanted to exploit DHS for his own political purposes — often by doing things that are illegal. People in this administration have said to Taylor, “Just wait until the second term, it’ll be no holds barred. It’ll be shock and awe.”

Taylor says, “Given what I’ve experienced in the administration, I have to support Joe Biden for president. Even though I’m not a democrat, even though I disagree on key issues, I’m confident that Joe Biden will protect the country. I am confident that he will not make the same mistakes.”

“After serving for more than two years in the Department of Homeland Security’s leadership during the Trump administration, I can attest that the country is less secure as a direct result of the president’s actions.

Like many Americans, I had hoped that Donald Trump, once in office, would soberly accept the burdens of the presidency — foremost among them the duty to keep America safe. But he did not rise to the challenge. Instead, the president has governed by whim, political calculation and self-interest.

I wasn’t in a position to judge how his personal deficiencies affected other important matters, such as the environment or energy policy, but when it came to national security, I witnessed the damning results firsthand.

The president has tried to turn DHS, the nation’s largest law enforcement agency, into a tool used for his political benefit. He insisted on a near-total focus on issues that he said were central to his reelection — in particular building a wall on the U.S. border with Mexico. Though he was often talked out of bad ideas at the last moment, the president would make obviously partisan requests of DHS, including when he told us to close the California-Mexico border during a March 28, 2019, Oval Office meeting — it would be better for him politically, he said, than closing long stretches of the Texas or Arizona border — or to “dump” illegal immigrants in Democratic-leaning sanctuary cities and states to overload their authorities, as he insisted several times.

Trump’s indiscipline was also a constant source of frustration. One day in February 2019, when congressional leaders were waiting for an answer from the White House on a pending deal to avoid a second government shutdown, the president demanded a DHS phone briefing to discuss the color of the wall. He was particularly interested in the merits of using spray paint and how the steel structure should be coated. Episodes like this occurred almost weekly.

The decision-making process was itself broken: Trump would abruptly endorse policy proposals with little or no consideration, by him or his advisers, of possible knock-on effects. That was the case in 2018 when then-Attorney General Jeff Sessions announced, at the White House’s urging, a “zero tolerance” policy to prosecute anyone who crossed the border illegally. The agencies involved were unprepared to implement the policy, causing a disastrous backlog of detentions that ultimately left migrant parents and their children separated.

Incredibly, after this ill-conceived operation was rightfully halted, in the following months the president repeatedly exhorted DHS officials to restart it and to implement a more deliberate policy of pulling migrant families apart en masse, so that adults would be deterred from coming to the border for fear of losing their children. The president was visibly furious on multiple occasions when my boss, then-Homeland Security Secretary Kirstjen Nielsen, refused.

Top DHS officials were regularly diverted from dealing with genuine security threats by the chore of responding to these inappropriate and often absurd executive requests, at all hours of the day and night. One morning it might be a demand to shut off congressionally appropriated funds to a foreign ally that had angered him, and that evening it might be a request to sharpen the spikes atop the border wall so they’d be more damaging to human flesh (“How much would that cost us?”). Meanwhile, Trump showed vanishingly little interest in subjects of vital national security interest, including cybersecurity, domestic terrorism and malicious foreign interference in U.S. affairs.

How can you run a huge organization under those conditions? You can’t. At DHS, daily management of its 250,000 employees suffered because of these frequent follies, putting the safety of Americans at risk.

The president has similarly undermined U.S. security abroad. His own former national security adviser John Bolton made the case so convincingly with his recent book and public accounts that there is little to add, other than to say that Bolton got it right. Because the commander in chief has diminished America’s influence overseas, today the nation has fewer friends and stronger enemies than when Trump took office.

Trump has also damaged the country in countless ways that don’t directly involve national security but, by stoking hatred and division, make Americans profoundly less safe.
The president’s bungled response to the coronavirus pandemic is the ultimate example. In his cavalier disregard for the seriousness of the threat, Trump failed to make effective use of the federal crisis response system painstakingly built after 9/11. Years of DHS planning for a pandemic threat have been largely wasted. Meanwhile, more than 165,000 Americans have died.

It is more than a little ironic that Trump is campaigning for a second term as a law-and-order president. His first term has been dangerously chaotic. Four more years of this are unthinkable.”

Previous: Open Letter To My Republican Friends
Next: Letters From The Brig – Vol. 1, No. 1