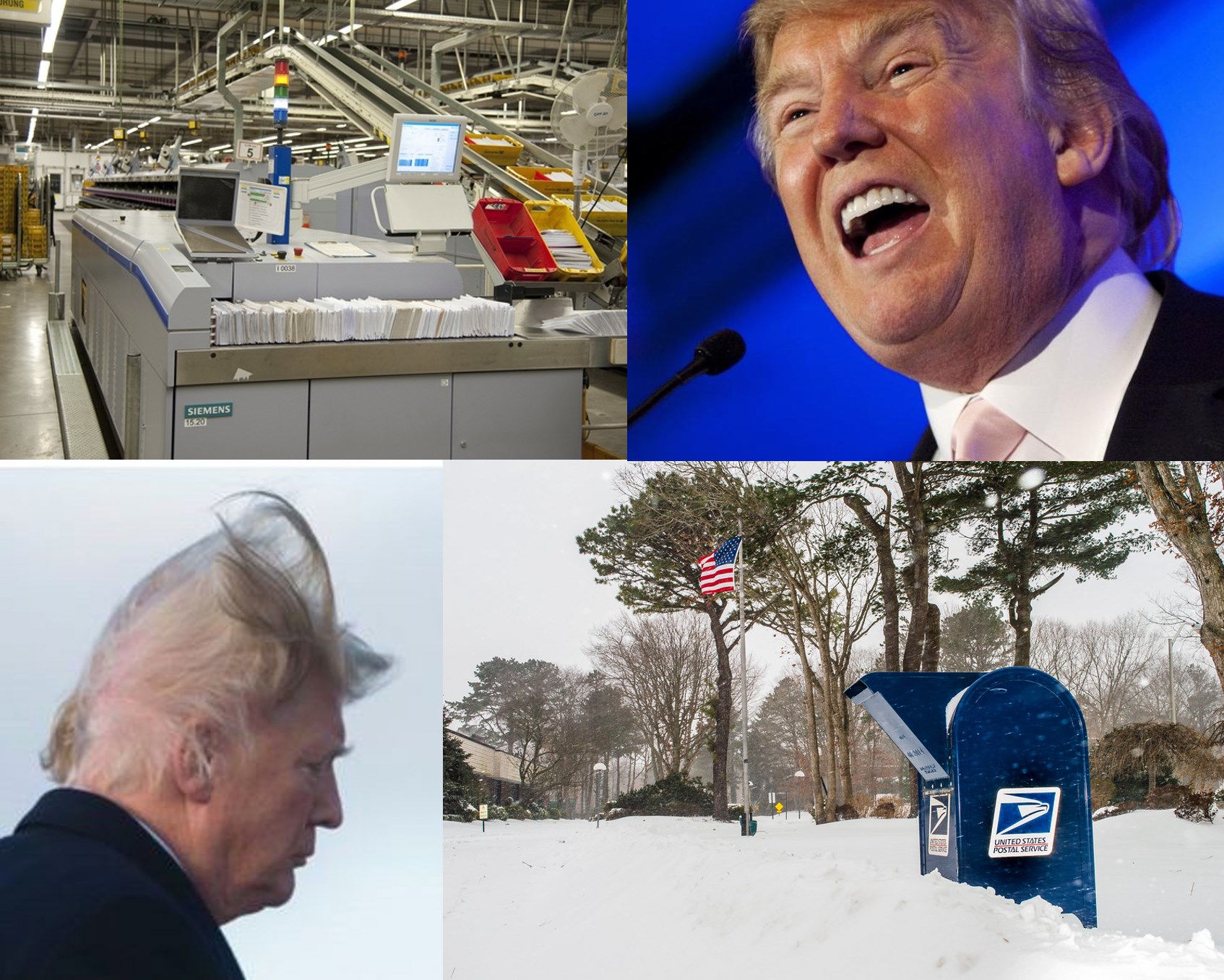 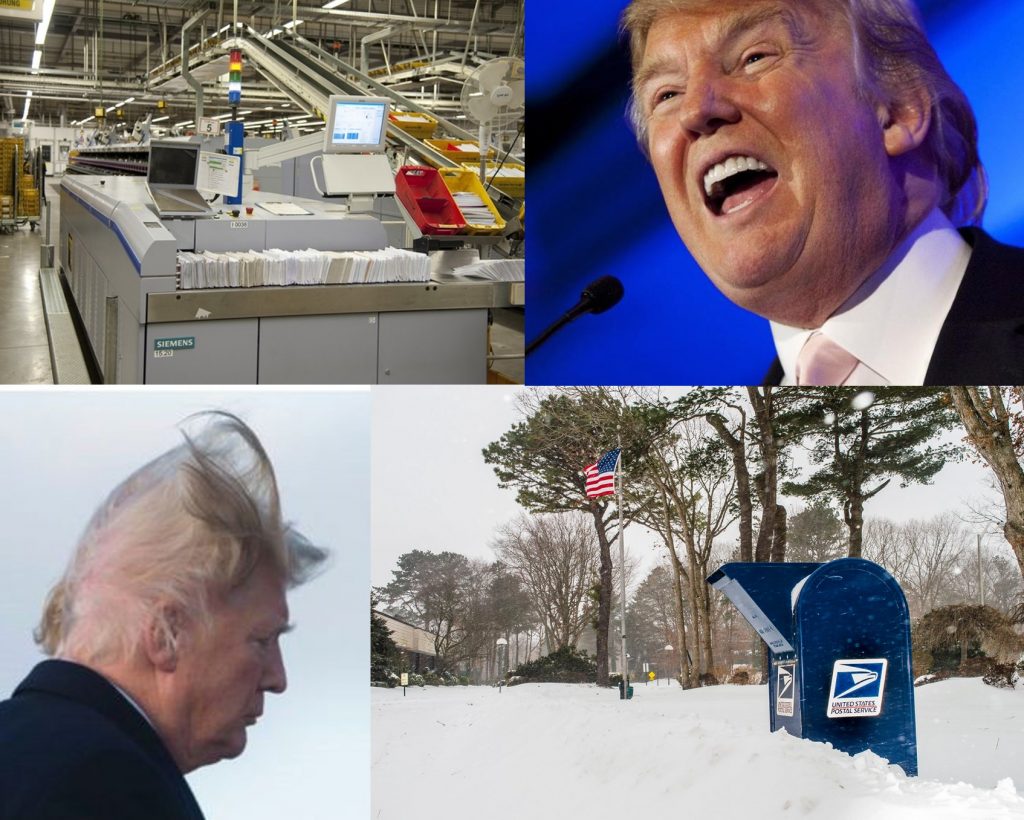 “The U.S. Postal Service has warned 46 states and the District of Columbia it cannot guarantee all ballots cast by mail for the November election will arrive in time to be counted.”

Under Trump appointed Postmaster General Louis DeJoy, a North Carolina business man with no experience working at the Postal Service, the USPS has implemented cost-cutting measures including limiting overtime for postal carriers, cracking down on late trips to deliver mail, freezing hiring and the removal of over 600 mail sorting machines that can handle 35,000 letters an hour, and separate them for the mail carriers. Reports of mail slowdown all over the country are coming in. Trump is willing to disenfranchise overseas service men and women by the hundreds of thousands, veterans of U.S. wars who are in nursing homes, both groups of people needing to use mail-in ballots. Let alone delaying the delivery of many American’s prescription medicine through the mail, the checks, the bills and important paperwork for small businesses. Even Trump and his wife requested mail-in ballots for Florida this week.

Trump’s sabotage of the U.S. Postal service months before the election, is not only about underfunding the agency in this new coronavirus funding bill that is stalled in Congress, hundreds of mail sorting machines worth millions of dollars have already been removed from postal stations across the country suspiciously and unannounced. Eye-witnesses have seen them being destroyed by Federal officials and placed in dumpsters. These mail sorting machines can sort 35,000 letters within an hour, and fashion them in separate bins to be delivered by the mail carriers with nearly pinpoint accuracy. Workers cannot replace those sorting devices without the mail slowing down dramatically.

In addition, curb-side blue mail boxes have been rounded up and taken off the streets by officials in my son’s previous home of Missoula, MT. As many as one-quarter of the amount of all blue mail boxes have disappeared off the streets in Missoula by federal agents within the last few days. Montana Senator Tester (D) got after it yesterday, and the people of Missoula started to make so much noise about it that the round-up of the blue curbside mailboxes was halted for now. This same effort was scheduled to take place nation-wide, because a memo was released subsequently after the temporary halt stating that the national effort to do the same was being further reviewed. This may have been a temporary disruption of those removals. But make no mistake, there is a systematic effort to undermine the postal service in time for the presidential election.

There is an assault on our Article 1 right in the Constitution of a postal service that delivers our mail. Article I, Section 8, Clause 7 of the United States Constitution, known as the Postal Clause or the Postal Power, empowers Congress “To establish Post Offices and Post Roads. This all goes back to the time of George Washington. The mail service has already slowed now because of Trump’s actions. What about our medicine in the mail, our checks, our bills to pay on time, important paperwork to run our business? And our ability to send important correspondence for 55 cents a letter?

All of this, so the criminal in the White House can steal another election? Because he believes that more Democrat votes will come through mail-in votes, and he wants to create confusion to throw it all into prolonged litigation if there are too many votes outstanding on election night to declare a clear winner.

A wake-up call my fellow moderate or liberals friends, or anybody who refuses to allow our country to fall under a fascist dictator rule with Trump. We are going to have to go and vote during this pandemic at the polls if at all possible – with proper distancing, masks and safety protocols. If we must vote with a mail-in ballot, order it immediately when you get the notice in a few weeks, and either mail it back a month early, or hand deliver it to a polling station when early voting begins (maybe the lines will not be as long in doing it that way?). Or find a designated drop off for your ballots, and try to avoid the U.S. mail, because obviously these heroes and essential workers of the postal service will need some relief. But if you have to mail it in, mail it many weeks in advance and all reason would suggest that it will get to the state’s election board, and with some cushion.

Trump and his henchmen are not going to steal this presidential election by another burning down of the Constitution. The postal service is our right as a Republic in the Constitution (Article 1) and it is supposed to be governed by Congress only, not by Trump and the executive branch. Trump’s appointed inspector general is a Trump stooge and donor from here in North Carolina, and who knows nothing about this work, but he is ordering the equipment to be rounded up and pulled, cutting overtime, hiring freeze in hiring. And now there is an official message from this guy to the election boards this week, stating that all mail-in ballots will not be available to count for the election. He sent this memo to the election boards of the states three months before the election! And at the exact time he is ordering the removal of millions of dollars worth of mail sorting machines that presumably have been in place for years and tax payers have already paid for. How could they be possibly repurposed somewhere else? My message for Postmaster General Louis DeJoy, is despite his unethical kneecapping efforts on our postal service, our common home state of North Carolina is going to turn blue on November 3rd.

Obama had promised not to speak out against his predecessor unless absolutely necessary. He spoke out yet again yesterday of these dire circumstances.

As reported by the Business Insider:

“Obama slams Trump’s attacks on the Postal Service, says the current administration is ‘more concerned with suppressing the vote than suppressing a virus’

“Former President Barack Obama on Friday accused President Donald Trump of attempting to suppress the vote with his recent attacks on the US Postal Service.”

“”Everyone depends on the USPS. Seniors for their Social Security, veterans for their prescriptions, small businesses trying to keep their doors open. They can’t be collateral damage for an administration more concerned with suppressing the vote than suppressing a virus,” Obama said via Twitter.

“If you’re in a state where you have the option to vote early, do that now,” Obama added. “The more votes in early, the less likely you’re going to see a last minute crunch, both at polling places and in states where mail-in ballots are permitted. Then tell everyone you know.”

Similarly, former Secretary of State Hillary Clinton, Trump’s 2016 opponent, in a tweet on Friday said Trump is attempting to “dismantle” the Postal Service.

Democrats in Congress have pushed for expanded access to mail-in voting as the coronavirus pandemic continues to spread at alarming rates across the US. Meanwhile, the president has repeatedly made unfounded assertions on mail-in voting in a blatant effort to undermine the legitimacy of the 2020 election as he trails former Vice President Joe Biden in the polls.””